Congratulations to the U14 girls Badminton team  (Anna McGarry, Liadan Shaw Smith, Juliet McGuckian and Maeve Rigney) on winning their league and to the U14 boys team (Quincy Tilles, Shay McDonnell, Marco Malinverno and Jack McBain) who were runners up in their league. 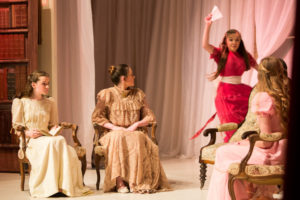 Congratulations to the cast and production team for superb performance on Pride and Prejudice! Congratulations to Keelan Daye and Phin Godfrey, Form 2, who won 1st prize in the Junior Technology category for their project. They created an online quiz platform for teachers who can now design a quiz in their subject area to enhance the learning experience for students. U19 Cricket World Cup in Bangladesh

Congratulations to Harry Tector, Transition Year, on his selection to represent Ireland. Well done also to past pupils, Jack Tector and Tom Stanton who have also been selected. Jack, Harry’s brother, will captain the team. We wish them well.